Algae Printing developed by Marin Sawa, in collaboration  with algal scientists, is a new concept of designing with microscopic cells of algae. By adapting an inkjet printer, living algal cells are digitally printed onto surfaces to create a new form of solid culture in the urban environment. There are a wide range of potential applications in the areas of healthy living and renewable energy.

Algae Printing represents the latest development in the biofabrication of semi-living systems. Based on digital printing technology, Algae Printing is an accessible technology for the precise deposition of cyanobacterial and algal cells onto solid surfaces in highly ordered arrays or patterns. We have developed methods to ensure that printed cells remain viable and are able to grow photosynthetically. Algae Printing has multiple potential applications at the intersection of design and algal biotechnology.

Printed algae wallpaper and its chlorophyll fluorescence imaging-PAM picture (Fm), showing active photosynthesis in the gradient of orange. In collaboration with the Ruban group, Queens Mary University of London 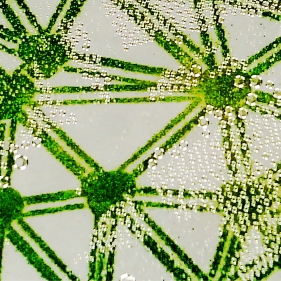 Following the energy crises at the beginning of the new millennium, designers and architects were increasingly attracted to the potential benefits of using algae, rather than crop plants, to produce biofuels. Algae are single-cell organisms that like plants perform oxygenic photosynthesis; that is they grow and multiply using the energy provided by sunlight, water and carbon dioxide with oxygen released into the atmosphere as a by-product. Importantly algae can grow at much faster rates than land plants making it possible for more frequent harvests. These scientific concepts were instrumental in stimulating ideas for the vertical farming of algae to make cities healthier and more sustainable places to live. Applications included generating renewable bioenergy, improving air quality, providing nutritious food and creating an aesthetically green environment. It is in this spirit that Algae Printing was developed.